Places to Explore in Belize

Depart from Belize City and head towards the northern part of the district from early hours.  Travel through many Creole settlements on the Northern Highway, back in time, to one of the several well preserved Mayan Temples in the country. This impressive and towering Mayan site is literally minutes away from Belize City.  Altun Ha, which literally means “Rock Stone Water, is commonly known for many astonishing unearthed items including the one of a kind “Kinich Ahau” – Jade Head of the Mayan “Sun God”; one of the most majestic relics of the Ancient Mayan civilization in the world!  Feel free to tour the site as you learn about the greatness of the Mayan Culture.  After the tour is over we head back to Belize City. 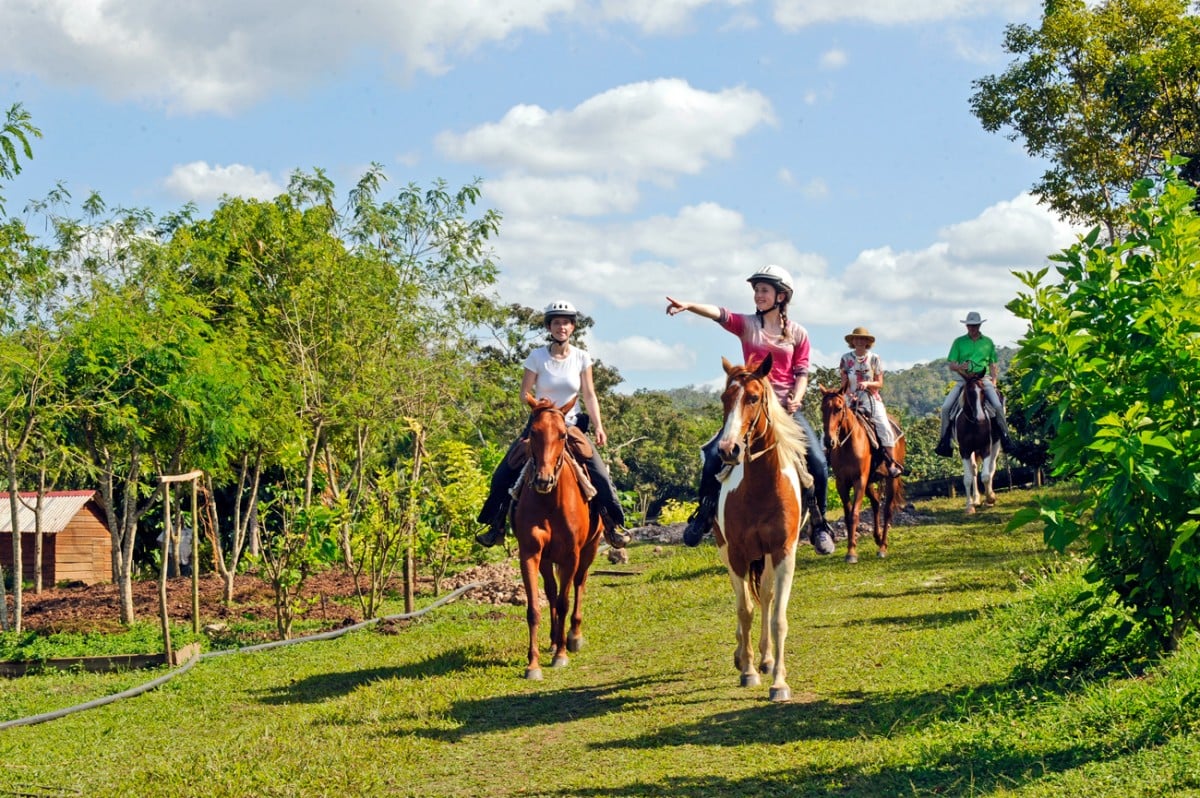 Journey along several picturesque Creole villages along the river valley, all product of the old Logwood and Mahogany industries which where the reason for the British Colony to be established over 200 years ago.  One of these is the Village of Bermudian Landing. There we will do a 1-2 hours horseback riding tour thru the small surrounding communities, then unto a jungle trek to meet the howler monkeys of the sanctuary. After which, you will have lunch, then back to Belize City or place of pick up. 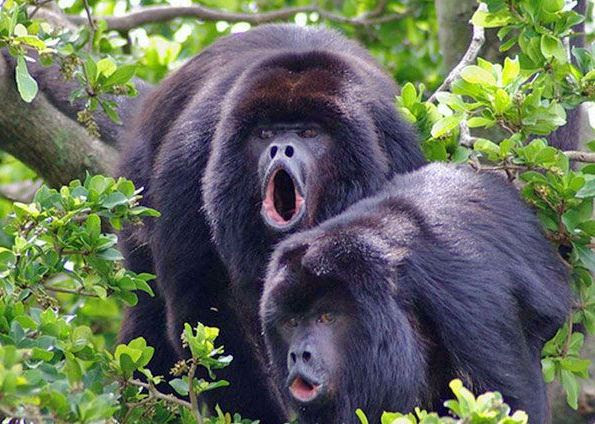 A quick 45 minute trip up the Philip Goldson Highway and up the river valley communities we arrive at the Baboon Sanctuary.  Listen to the unique, rasping sound of the howler monkey calls living within this Sanctuary from over a mile away!  Amaze yourself at this intrepid and agile animals living in their natural habitat where they would usually put up a quite a show of their own.  Learn of their importance to our Eco-System and their struggle for survival.  Tour ends in Belize City or place of origin. From Belize City we head up the western part of the country via the George Price Highway named after the father of the Nation and first ever Prime Minister of Belize, the Right Honourable George K. Price. Journey through Hattieville, a Creole Settlement, which formed after the devastation suffered by Belize City due to the passing of a hurricane of the same name in 1961 when Belize was still a British Colony. A few minutes later arrive at the world famous Belize Zoo where animals, even though safely kept away from visitors, can be viewed in their natural habitat within a controlled environment.  One of a kind experience of all the most exotic animals of the Central American jungles in one location!

Catch a glimpse of the early morning birds of Belize and many more!  Take a relaxing tour to the northern part of Belize to Crooked Tree, one of the many Creole Communities on the Philip Goldson Highway.  Take a walk around the village and spot many of the local colorful species of birds rummaging through the trees and the branches. Watch butterflies, iguanas, rat-bats, orchids, and many more local animals all co-habiting along with villagers of this beautiful community.  Have lunch and sodas at the village while you enjoy a cool breeze over the lagoon. Do not forget to purchase the delicious roasted cashew seeds, among other locally produced treats which are native to this village.

Heading the western part of the country, go past the Capital of the Belize and head up the hills towards the Maya Mountains all the way to San Ignacio. First cross a river on a hand operated ferry for an amazing visit to Xunantunich (Maiden of the Rock) Mayan ruins, commonly known as “El Castillo-The Castle” for its height and majesty. These centuries old Mayan temple along with other formidable structures was once the epicenter of an incredible ancient urban community buzzing with activity.  Recent archaeological discoveries have uncovered one of the largest Mayan Tombs in the country at this location where many skeletal remains, along with those of a Mayan leader, and various artifacts, have been found.  From the peak of El Castillo, get a panoramic view of nearby villages in Belize and Guatemala.

In the true spirit of the “West is Best” proverb from the locals travel to the exotic resort of Jaguar Paw.  Tour begins at the entrance of the Great Sibun Cave.  If you are new to “tubing” this will definitely be an experience of a lifetime as we journey through jungle-covered rivers and cave systems, abundant with stalagmites and stalactites.  Travel to the “Xibalba” (she-bal-ba) straight into the belly of the Mayan “Hell” where human sacrifices were practiced to appease the Mayan God of Rain “Chaac”.  If you are lucky you may even come across some of the gruesome skeletal remains of this practice.  Lunch and sodas at resort. 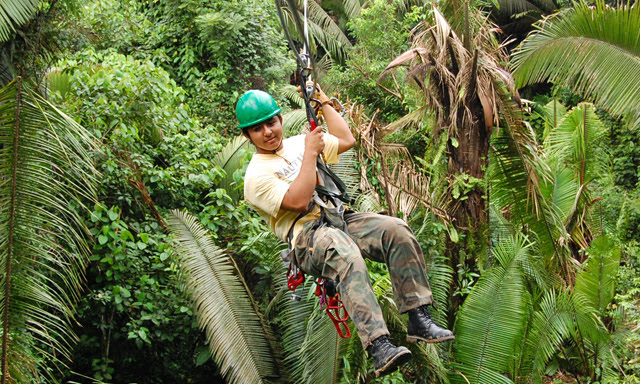 If you are the action junky this next tour will definitely spark your interest as you get to fly through the canopy of the rainforest, zip-lining through the trees. Get a one of kind fast tracking aerial trek through the Belizean Jungle while you get a unique prospective of lush green tropical forest down below.  Warning this adventure is not suited for the faint at heart!

After a refreshing dip in emerald crystal clear waters of our rivers, we then move on to the beautiful cave systems of St. Hermans. There you will get the chance of a lifetime to explore some of our cave systems and get to see the stalagmites, stalactites and other crystal formations inside the cave.

Via the George Price Highway we Journey from Belize City, the “Old Capital”, directly to the New and current Capital of our country, Belmopan, “the Garden City”.  We go past the “Garden City” and up the Hummingbird Highway through its narrow snake like winding roads. This highway will lead us to our destination into one of our few National Parks; where the “in-land” Blue Hole sits right in the middle of the Rainforest.  Here you will get the chance to swim in its cool refreshing waters among some of our local fishes which will swim right past you. This is an amazingly therapeutic experience would wouldn’t want to miss! 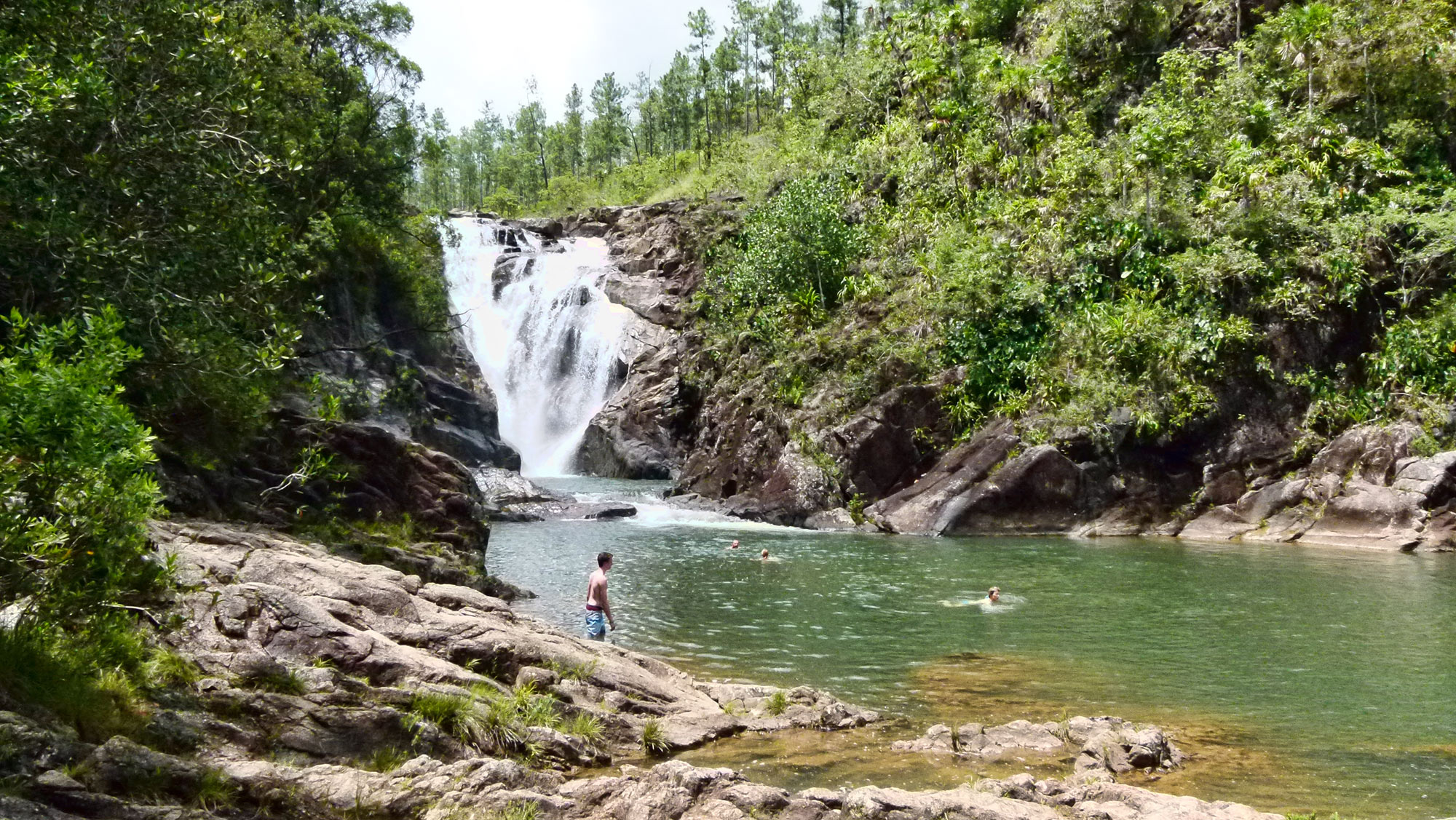 Up the western hilly terrain of the country all the way to the Mountain Pine Ridge Forest Reserve in the heart of Belize.  Many of the settlements we will be passing through grew after very destructive hurricanes which hit Belize City in its early days. At Georgeville Village, we turn in on a dirt road which leads to the mountainous areas of Belize. Stand in awe of the 1,000 ft. waterfalls (if weather permits), explore the Rio Frio Caves, and take a refreshing dip in the Natural Swimming Pools and bask in the bountiful beauty of these watery natural amusement parks.

From Georgeville Village we come off the major highways and head into a dirt road for a short bumpy ride, all part of the fun, to the largest, most recently excavated Mayan site.  Caracol is nestled high on the Vaca Plateau on the Chiquibul Jungle within the Maya Mountains. This is in fact the site of the highest temple known to man in this region and was part of a very complex system of urban meccas and kingdoms over centuries ago when Belize was home to over a million people living in harmony with nature. If you dare climb the sacrificial steps all the way to top where you can enjoy a very scenic view of Chiquibul Jungle in all its splendor.